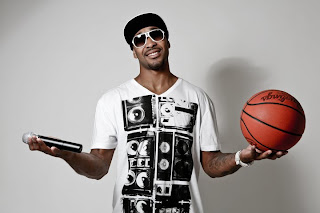 Some artists strain hard to acquire and international following. Others are naturals at communication, and entertain and inspire wherever they go. GLEN-A.M. has kept crowds cheering on both sides of the Pacific for years, playing basketball at an elite level all over the world. The 6’9″ forward with the silver tongue starred at Pepperdine University, and graced the hardwood courts of Germany, Belgium, Italy, Turkey, Dominican Republic, and Puerto Rico, too. Lately, he’s taken the KBL — that’s the Korean Basketball League — by storm, showing off his skills to a hoops-hungry country. But even if he wasn’t a superb baller, chances are, GLEN-A.M. would have won himself a following in Asia. They love hip-hop on the Pacific Rim, and the budding star is as smooth on the mic as he is on the court.

Make no mistake, he’s gotten to this point as much by natural talent as by hard work. The A.M. nickname comes from his ingrained reputation amongst friends as a man who goes to bed very late and wakes up very early. It also represents his two core skills, athletics and musician. Furthermore A.M. really are the initials of his middle and last name. It’s all too natural, just like his knack for pumping out stellar hip-hop music.

That’s demonstrated in “1 Click Away,” GLEN-A.M.’s debut video. The clip introduces GLEN-A.M. as a deep-voiced emcee with a conversational style, a confident delivery, a sure hand with a metaphor, and a welcoming smile. He trades lines with R&B singer Kay Cola, who spikes the track with a glittering hook. The production, too, is tight: a slamming beat, sound effects in the verses, and sweeping synthesizer pads for the chorus. It’s the sort of playful hip-hop recording that could be a hit anywhere from Glen’s hometown of Los Angeles to his current place of residence in South Korea.
Ladies and gentlemen.. “1 Click Away”