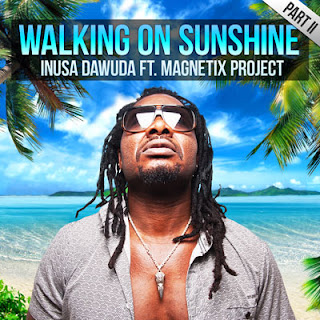 Hello programming friends, it’s Andy Gesner and the HIP Video Promo crew bringing you a feel good, sun-soaked clip that will get you ready for the highly anticipated warm weather! Inusa Dawuda is a true global artist whose talents include singing, songwriting, saxophonist and all around entertainer. It’s this diversity that has made his unique blend of reggae, house, dance and lounge popular with audiences everywhere from Germany to Italy to Russia (where he was declared “Russia’s and C.I.S. territory most successful foreign artist.”

He has been quick and wise enough to translate this popularity into live appearances all across Europe, having topped the bill at some of the the most prestigious party venues such as Fabrique in Moscow, Q-Club in Zurich, Paradise Club in Mykonos and Nikki Beach right here in Miami, USA! At all of these stops he has wowed the crowd with his sound and his newest album, I Feel Beautiful, with the single for “Walking On Sunshine” garnering a particularly positive response. It starts with a constant rhythm of hand claps and is quickly joined by Inusa’s smooth flow and raspy baritone voice to pick up the pace even more. It’s an upbeat ode to summer love and the kicking back and basking in the sun, and is certainly something we’re all looking forward to experiencing this year!

For a song called “Walking On Sunshine”, it’s only natural that the video is chock full of imagery from a tropical paradise with pristine beaches, magnificent ocean waves and a nightlife that is second to none. It seems like everybody in the video is feeling the beat, with a talented collection of gentlemen showing their moves on the beach and doing their best to impress a female passerby. She returns the favor that evening when she launches into a fiery dance routine on the city streets that wows both the boys and all of the strangers passing by. from the boys on the beach, to girls on the streets at night, and they’re quick to move in time to the infectious rhythms of “Walking On Sunshine.” Click here for the entire bio on HIPVideoPromo.com!