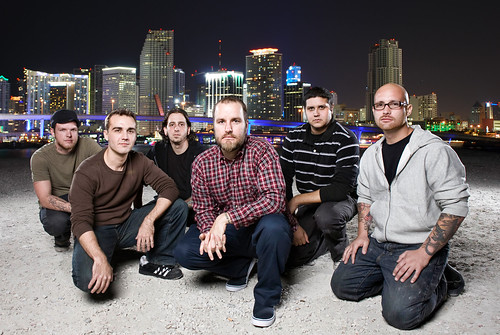 MY AMENDS is a 5-piece South Florida-based Hard Rock band with a signature hard-driving, intensely-emotional sound and brutally honest lyrics that have established them as a credible music force. Since their inception in late 2008, MY AMENDS have laid the groundwork to becoming one of the most intriguing bands in their genre and are proving they have only just begun to scratch the surface.

After signing with Ingenious Records in late 2009, their E.P. ‘That Of A Lion’ (released April 2010) was described by critics as “fierce rock & roll… A style with no labels or limits.” “Pure anxiety roars out of Broward County FL… Intense, powerful, strong with hoarse emotions, intense riffs and radiant melodies…”

Alongside two national tours, sharing stages with acts such as ‘Every Time I Die’, ‘The Sleeping’, ‘Vanna’, ‘Straight Line Stich’ and ‘Poison The Well’, MY AMENDS picked up worldwide distribution on 100+ digital stores and endorsement deals with Clayton picks, SliverFox drum sticks and Lashbrook Guitars. Their music has been placed for major brands ESPN and WWE Action figures web campaigns, and earned spots in five different categories on the Grammy Entry-Ballot.

With fervent anticipation surrounding their upcoming album ‘ACCEPTIONS‘, set for release this August 9, 2011.