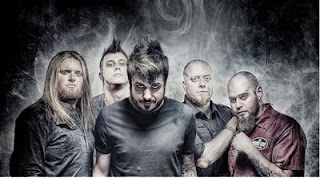 From evocative drumbeats to heavy, hard driving vocals, we see a side of rock music that excites us here at HIP Video Music Promo in Memphis’ own explosive outfit, Surrender The Fall. Since their inception, they have had just one rocking agenda; to make audiences never forget their music. Like the sounds of hard rockers such as Papa Roach and P.O.D., Surrender the Fall present their listeners with guitars that melt faces—all of the while having an extreme sense of down right rock and roll.
Lead singer Jared Cole played guitar tremendously as a teen, as well as his fellow band mate, Eddie Trye. Along with Anthony Pitts on guitar, Devin Hightower on the bass, and Ed Harris on drums, the band intensely rocks Memphis, Tennessee. Influenced by Led Zeppelin, Pink Floyd, and Metallica, the music of Surrender the Fall immensely grabs you, making it incredibly impossible to ignore this badass, straight up rock sound. With hints of pop elements, the band discards all of the music of mainstream radio songs to present us with in-your-face guitar solos and bellowing bass notes.
This hard work and attention to detail is apparent in their new full length album, Burn In The Spotlight, and it also caught the attention of the folks at Rum Bum Records, who were quick to sign the band to their roster. They’ve toured regularly in the south and Midwest, have made fans all across America and are already receiving significant radio airplay in the Volunteer State.
In their new video for “Love Hate Masquerade,” we see the dirty side of Surrender the Fall. It begins with a hot, rocker chick lying on a white bed in a room full of records. It is clear that she can’t keep her hands off of front man, Jared Cole, and little does she know, he’s on his way to rock out with more ladies on his tour bus. The video shows the band performing their song, and the video gives us hints towards who these rockers really are behind the scenes. We’re presented with a video that is extreme and hardcore, and characteristically shows the true meaning of rock and roll. The video ends with a bottle of whiskey and a surprise; we won’t tell you what it is, but it can’t get more rock and roll from there.