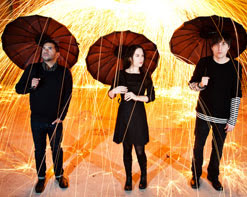 In regards to their music writing, The Capsules have a tendency for sleepless nights, writing pensive and late night reveries. These elements are catapulting within the realms of their songs on the album Northern Lights & Southern Skies­. Tracks unfold into a place where the heart is open to the mysterious thoughts pertaining to the universe, and help music listeners gain a little bit of insight into the experiences of love, loss, and longing. However, The Capsules decided to expand their musical pallets on Northern Lights & Southern Skies and used less guitar and more keyboards, loops, and electronics than they have on previous efforts. “Across the Sky” and “Our Apocalypse” still contains their otherworldly aura including a dark edge that keeps everything rooted to the earth. Click HERE for the full bio on HIPVideoPromo.com.