Jared Scharff: “How I Got the Gig”

Big D and the Kids Table: Fluent In Stroll

Tesla: Roaring off to Europe! 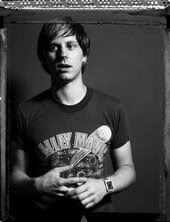 In his blog in the year 2007, Jared Scharff relates how he got the Saturday Night Live guitarist gig.
He asked the previous guitarist, Dr. Luke, whom he’d known for 10 years, if he could audition for the role. Dr. Luke said he wanted Jared to be his replacement–but first, there were many “corporate hoops” they’d have to jump through.

On an early morning, Jared found himself nerviously awaiting an audition. The applicants had been narrowed down to four guys, and only one was going to get it. Jared said he had a bad feeling about it, since he said he couldn’t “sight read” very well. Sight-reading is playing music you’ve never played before on the spot, once they hand you the composition.

But apparently, he blasted through the audition, because he got the gig. He said he got “The Call” on his way to vacation in Napa Valley. Which of course, made it “the best vacation ever.”

Jared Scharff, in addition to being the SNL guitarist, fronts the band Jared Scharff and the Royals. Check out more here.