Rebecca Jordan: Players only love you when they’re playing 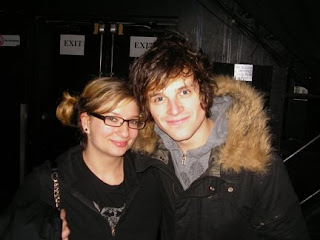 Jet Lag Gemini predict that one day, there will be a Vitamin Water flavor named after them.

And it will have bananas and coconuts in it. It was foretold to them in a prophetic dream. Or so they said in their MTV Buzzworthy interview, which you definitely should check out if you’re nosy about other people’s lives, or obessed with JLG, or both.

The interview also revealed some other interesting details about JLG, including the face that they made their music video, “Fit To Be Tied,” themselves from scratch, using zippo lighter fluid and a tennis court. Sounds fun.

And they also love getting sweaty at concerts, although, while in Canada, they had problems with that. Canada’s just a little too cold.

They just recently came back from a successful touring of Canada, in fact, landing back in lovely Jersey.
Jet Lag Gemini probably has jet leg right now. Or, if they made the trip by van, they’re probably just exhausted in general.
Above, Mischa from Jet Lag Gemini is grinning with Jodie from Much Music, whom he met during the tour.

The “Fit To Be Tied” video is below: