Flashback Friday – NEEDTOBREATHE – “You Are Here”

Where can I promote my music video? 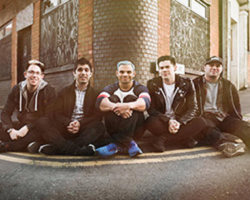 Greetings and a happy Monday to you all! It’s Monday and we hope to start off your week on a positive, inspirational note by sharing the story of none other than Patent Pending.

In 2001, Patent Pending got their start when high school friends Joe Ragosta and Drew Buffardi recruited Joe’s younger brother Michael to sing and their classmate Anthony Mingoia to play drums at a local show. They made a name for themselves playing shows around Long Island – from basements and DIY venues to clubs – and released a series of EPs: Meet the Fat Kids (2001), The Pirate House (2001), Air Drew (2002), Drive By (2002), Don’t Quite Your Day Job (2004), and …Is Your Biological Father (2004). Also in 2004, they filmed their first music video, for “The June Spirit.”

Patent Pending released their debut album, Save Each Other, The Whales Are Doing Fine on We Put Out Records in 2006. Of course, the ride since then hasn’t been without obstacles or bumps in the road, but they’ve always managed to keep their heads up through it all. After the release of their 2009 EP Attack of the Awesome!!!, Michael left the band and Joe took over on lead vocals. Their next few releases – I’m Not Alone (EP, 2010), Second Family (2011), Brighter (2013), and Mario and the Brick Breakers: Greatest Hits (2014) – were released independently, and in 2015, signed to Rude Records. They’ve since released two more EPs – Armageddon (2015) and Seasons Greetings (2016) – and two more albums – Riot Hearts Rebellion (2015) and a cover compilation album, Other People’s Greatest Hits (2017).

Eighteen years into their career, Patent Pending are still going strong. They continue to put out new music regularly, their videos are always a BLAST to watch, and their live shows are one-of-a-kind. We had the pleasure of promoting the clip for “Wasted / Wake Me Up”, a mash-up of Tiesto’s “Wasted” and Avicii’s “Wake Me Up.” Check it out below!

What makes a live show truly special? Part of that is the energy, something Patent Pending have – live photos frequently show them getting some serious air time. Part of it is the planned antics and moments designed to make people laugh- “Anti-Everything” is accompanied by a choreographed “boy band” style dance, and shows around Christmastime will often see the band dressed in appropriate Christmas sweaters or even pajamas! But the thing that makes a live show really stand out is when a band can connect with their fans, and that’s something Patent Pending truly excel at. The album Second Family was named after the community that is their fan base. When you go to a Patent Pending show, whether it’s your first time or your twentieth (or if you’re one of those that has been to fifty or more shows), you’re immediately welcomed and made to feel at home.

This “second family” is a powerful one. In 2012, Patent Pending were nominated through a nationwide “Battle of the Bands” as one of the top unsigned bands in the Northeast. They won this contest, being named the top unsigned band in the Northeast, thanks to votes and support from their dedicated “second family members”. Soon, it was announced they’d won the entire contest… Patent Pending were voted the top unsigned band in the country, and thus had the opportunity to perform at the Billboard Music Awards in Las Vegas! Whether at a major award show or a Long Island rock club, their energy can’t be beat.

If there’s any band that shows you can do whatever you set your mind to, it’s Patent Pending. In 2011 they shared a song where they asked Simple Plan to bring them on tour, and nearly six years later, in 2017, they made it happen! Two bands who manage to both connect with their fans with heartfelt songs, and put on crazy high-energy shows – it was a perfect match. If that isn’t motivation to pursue your dreams and work hard, what is?

In addition to the US, Patent Pending have built a strong following in the UK, routinely playing sold-out shows as both a headliner and supporting bands like Bowling For Soup and Waterparks. Keep up with the band on Facebook, Twitter, Instagram, and their website!