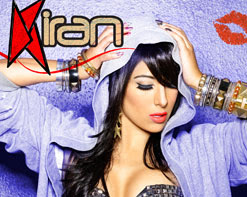 With a style that can be compared to contemporary singers such as Lady Ga Ga and Nicki Minaj, singer K, or better known as Kiran, has put all else aside to work on her budding music career. However, it didn’t take the staff of HIP Video Promo long to recognize her all-encompassing talents. From her experiences as the host of The DesiHits! Show, we have watched Kiran woo the likes of well-known artists such as rapper T.I. and the band Gym Class Heroes with her undeniable style and charm. However, with the introduction of her video “ChoKolate Soda,” we see the ever-stylish approach to music that Kiran completely possesses.

Next to her work as a television host, Kiran has worked with some of the biggest names on the music scene. Artists such as Jennifer Lopez and Justin Timberlake have experienced the charming demeanor of Kiran, and she has also danced and performed in many music videos and stage shows from Shakira to Snoop Dogg. Her versatility as an entertainer has also had her do some acting and modeling on the side. With all of this she has begun to make a name for herself . With so much talent and experiences under her belt, Kiran decided that it was time to launch a career in the passion that rules her life—music. Kiran’s music career began while riding on a J2 flight plane. There she met and spoke with her current producer, who has worked with artists such as JLo, Shakira, and Cassies (King of Hearts). The flashy choreography and production of “ChoKolate Soda” is by means a tease for what Kiran has to offer the world through her powerful song and dance. Director & Choreographer Edwin Moore presents us with a video that emanates all that Kiran encompasses as a singer and performer. The song “ChoKolate Soda” itself creates beats that will make your body pulsate and rhythms that will leave you wanting more. Full bio HERE!