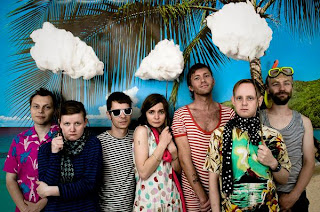 Now they’re creating a new music video for the floaty, fluttery single, “Sing Along,” and we’re going to be its lucky promoters!

Múm is well-known in the Scandinavian music scene, cultivating soft, otherworldly lullabies that are sometimes dark and mysterious, and other times warm and airy. If you want it in a nutshell, it helps to know that they decorated their MySpace page with a hot-air balloon background.

Check out the genius, live version of “Sing Along” below: