of Montreal Documentary: The Past Is A Grotesque Animal 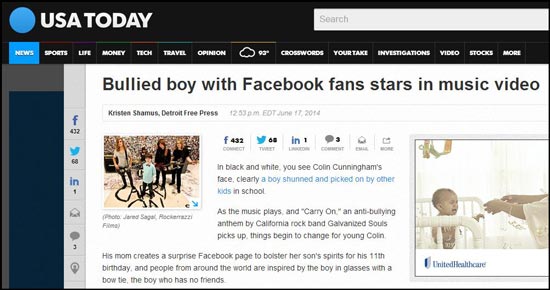 Earlier this year we worked with West Coast alternative rockers, Galvanized Souls, bringing you their badass “Shut You Down” video. This week the band is making headlines because their newly released follow-up music video stars a young boy who himself made national headlines when his mom, who was acutely aware that her son was having difficulties with classmates at school utilized Facebook to make sure his upcoming birthday party was full of friends. Granted it was a bit of a longshot, but the response was overwhelmingly supportive.

Now with the emergence of his starring role in the new Galvanized Souls music video, his upgraded social status is officially set in stone: HE’S THE COOL KID. (take that bullies.)

USAToday.com, in addition to numerous other respected news outlets have been bringing big attention to the video, which is appropriately titled “Carry On.”

We’re confident he’s going to be A-OK from here on out.

Check out the article here or just skip it and watch the heartfelt video below: