Of Montreal to Release New EP and Book 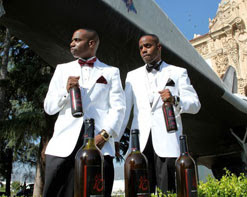 Ryan and Bryan Wood are the new underground voices of R&B with their fresh new single simply titled, “OOH AH.” Unabashedly referring to the familiar noises of satisfying lovemaking, the track is a sexually charged mid-tempo R&B extravaganza that will get your blood pumping to all the right places.

Don’t mistake frankness and honesty for lack of consideration. These two crooners have been one of the hardest working bands of brothers since the turn of the century, when they founded their own music label New Money Records in Beverly Hils, CA (as well as a clothing line, an all-natural supplement drink and more!). As you may all be aware, running a label is a labor of love and hard work. Fortunately for the Wood brothers, their work did not go unrewarded. Their fantastic and constant stream of music videos has built them a massive YouTube and MySpace following. The duo’s work has even been noticed and featured by the ultra popular genre website WorldStarHipHop. New Money Twinz has already achieved a ton of buzz on the net, getting featured in blogs like Coast 2 Coast Mixtapes and Mixtape Wire. They have been featured videos on MTV.com and Myspace.com’s “Famous and Unsigned,” and also had several appearances on BET’s 106 & Park, MTV and The WB television outlets. The group has even been identified as a web trend on Billboard’s website!

Check out the video for “Ooh-Ah” below!