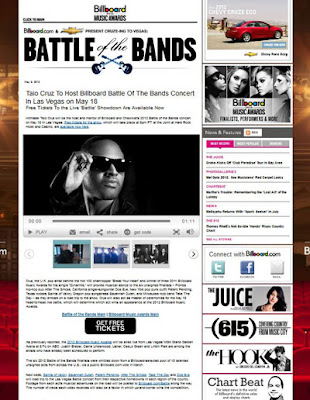 From Billboard.com: Hitmaker Taio Cruz will be the host and mentor of Billboard and Chevrolet’s 2012 Battle of the Bands concert on May 18 in Las Vegas. Free tickets for the show, which will take place at 8pm PT at the Joint at Hard Rock Hotel and Casino, are available now here.

CALLING ALL WEST COAST PATENT PENDING FANS:
As we mentioned in an earlier post, Patent Pending are competing Billboard.com’s Battle of The Bands on May 18! If you live in or near Las Vegas, or will be visiting the area around May 18, we sincerely hope that you’ll show support for these guys during this HUGE opportunity for them by buying a ticket and showing them support AT the show.

Show Billboard.com just how important Patent Pending are to you!