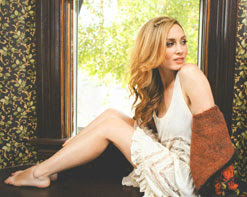 If you were to talk about artists such as Jackson Browne, Glen Campbell and Kris Kristofferson, you’d expect to see them listed as influences for an artist hoping to make their name as a songsmith with more hooks than Muhammed Ali and a musical attention to detail that is second to none. But when we’re talking Katie Cole, they’re not just influences, they’re also her friends and musical contemporaries. So how does an up and coming artist like Cole manage to appear onstage with Jackson Browne, as a guest vocalist on Campbell’s 61st and final studio album, Ghost on the Canvas, and enlist Kristofferson to appear her own upcoming full length, Lay It All Down? Because she’s not just hoping to make a name for herself and songwriting prowess, she’s already done it and has enlisted some very talented friends along the way!

Katie Cole was raised in the beautiful city of Melbourne, Australia and grew up surrounded by the sounds of the Stones, Hendrix, Joplin, Maria Callas; all compliments of her musically inclined parents. Along the way she dove into Smashing Pumpkins, Aretha Franklin and Eurythmics, all of which helped her craft her own self-described sound of having flavors of Sheryl Crow, KT Tunstall and Tom Petty. She quickly established herself touring across Australia and releasing her first EP, all of which raised her profile enough that she would eventually be discovered by acclaimed producer Howard Willing. His credits include Counting Crows, Liz Phair, and Ok Go, as well as artists like Sheryl Crow and Smashing Pumpkins that Cole lists as some of her primary influences.

It wasn’t long after a permanent move to Los Angeles that Katie began making the rounds of LA, as well as Nashville, collaborating with a plethora of songwriting talent. Her first offering was the critically acclaimed Lost Inside A Moment EP, which received two spots on BBC Radio 2 playlists, awards from organizations such as ASCAP and OurStage, and having her song “Gravity” become the sound behind the national ad campaign for the Movado brand of watches. Combining these experiences as well as the time she spent in the presence of legends such as Glen Campbell and Kris Kristofferson, Cole has channeled it all together to pull off what is her finest offering yet with Lay It All Down. Set to be released in early 2013, the album once again finds Howard Willing behind the glass and offers songs that invoke the classic sounds of artists such as Tom Petty and Fleetwood Mac, and contemporary stars such as Brandi Carlile. Cole describes it as “somewhere between American country and British pop”. The lead single for “I Can’t Wait” is already receiving spins on BBC Radio 2, and is setting to impact here in the US as we type. Click HERE for the full bio!