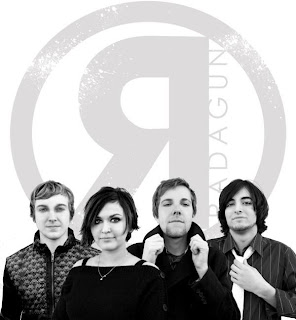 Radagun’s influences come from everywhere. They’re influenced by Incubus, by The Beatles, by Danny Elfman and even by Missy Elliot. As a result, their music is fresh and original, while at the same time poppy and addictive. They found the middle line between ulta-indie and mainstream–they’re just a little weird, but not totally out there.

Radagun is breaking out with a new album come Feb. 15. The new album is called Life Lessons, and lead singer Aimee Ortiz Low said most of the lyrics come straight out of personal experiences.

This is what she wrote in the band blog:

“I found an old diary that I used to keep in high school, it was really fun to read I laughed about all the things I used to worry so much about…boys…school…wishing I was popular. Some of the lyrics are from the perspective of my close friends, or people who were quite the opposite of friends, but have still had an impact on my life in some way. Then some songs that are just plain fun…just because.”