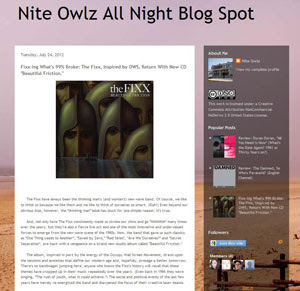 Nite Owlz All Night Blog Spot has an interesting blog on “Beautiful Friction” and the role of The Fixx in today’s world  HERE.
Here’s an except:
The Fixx have always been the thinking man’s (and woman’s) new wave band. Of course, we like to think so because we like them and we like to think of ourselves as smart. (Duh!) Even beyond our obvious bias, however, the “thinking man” label has stuck for one simple reason: It’s true.
The new album, inspired in part by the energy of the Occupy Wall Street Movement, draws upon the tensions and anxieties that define our modern age and, hopefully, presage a better tomorrow. There’s no bandwagon jumping here; anyone who knows the Fixx’s history will recall that these themes have cropped up in their music repeatedly over the years. (Even back in 1986 they were singing, “The rush of youth, what it could achieve.”) The social and political events of the last few years have merely re-energized the band and sharpened the focus of their creative laser beams.