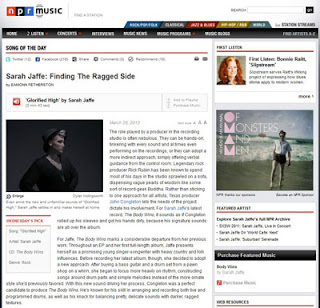 We’re so psyched that the extremely talented and deserving, Sarah Jaffe has caught the eyes and ears of the good folks over at NPR Music. Check out an excerpt from her feature below!

From NPR.org: The role played by a producer in the recording studio is often nebulous. They can be hands-on, tinkering with every sound and at times even performing on the recordings, or they can adopt a more indirect approach, simply offering verbal guidance from the control room. Legendary rock producer Rick Rubin has been known to spend most of his days in the studio sprawled on a sofa, dispensing vague pearls of wisdom like some sort of record-geek Buddha. Rather than sticking to one approach for all artists, Texas producer John Congleton lets the needs of the project dictate his involvement. For Sarah Jaffe‘s latest record, The Body Wins, it sounds as if Congleton rolled up his sleeves and got his hands dirty, because his signature sounds are all over the album.