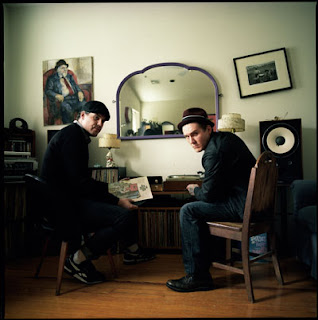 Hello programming pals, it’s Andy Gesner and the HIP staff bringing you round two of one of our favorites! The Horrible Crowes offers an interesting juxtaposition of life, where sometimes their dark commentary on life can enlighten our minds and souls to the beautiful things in life. Frontman Brian Fallon has never been afraid to sing about things in life that most everyday people can relate to. Whether it be his working class rhetoric that has made his primary project The Gaslight Anthem a national darling or the more introspective and intimate approach of his self-described “for me” project, The Horrible Crowes, he is a man unafraid to bare his soul. His own take on The Horrible Crowes pretty much sums it up; “As much as I have this fantasy in the Gaslight Anthem of being Bruce Springsteen, I also have this fantasy of being Tom Waits or Greg Dulli. These songs are very dark; they’re like hymns for lonely people, it’s really a trip through a breakdown and that descent into madness and hopefully redemption.”

Top to bottom, the band’s debut album Elsie offers a little bit of everything to the listener, always offering a sense of romance established by the lyrics and music. Huffington Post blogger Jon Chattman named Elsie as his #2 album of 2011. He comments that “Out of nowhere, this Gaslight Anthem (don’t call it a) side project resonated with me so strongly. There’s not a bad song on this.” Most bands think that they need to blast out of the gate and put their biggest rockers at the front of the album, but lead off tracks “Last Rites” and “Sugar” set a decidedly more mellow tone to start the record and helps to build the anticipation so when songs like “Go Tell Everybody” and “Mary Ann” hit with full force the listener feels every grunt and groan of Fallon’s raspy voice.

For the new single “Ladykiller” Fallon has turned to a familiar face to help bring his music to life; Kevin Custer. Custer was the man behind the lens for Gaslight Anthem singles “The ’59 Sound”, “Great Expectations” and “American Slang” as well as a number of other high profile SideOneDummy video projects, so we know they are in good hands. Shot entirely in the always-classy style of black and white, Custer works in tasteful shots of the band playing one of their limited live shows along with slow motion shots of an urban landscape, from the train tracks, to the factories down to the beaches and boardwalks. Just like the music itself, there is a sense of romance and heartache throughout that lends itself to the lyrical theme of the pain of young boys who have had their hearts and emotions broken, with Fallon repeatedly admitting that “Ladykiller got the both of us….” But even in this disappointment there is still the beauty of young love at play, reaffirming our belief that even in the darkness of the songs there’s still a beauty to be had.