The Dirty Heads are going everywhere 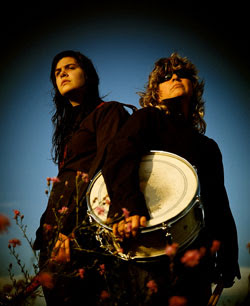 According to Urban Trendz mag, some say The Pack’s guitarist Becky Black’s pick is the “Devil’s toenail.”
After listening to the howling, gritty, down-in-the-dirt blues that is The Pack A.D., I can’t say for certain that it isn’t.

Classic blues rock at its most fast-paced and furious, The Pack A.D. is starting to become a sensation in British Columbia, Canada.

Utilizing vocals that come straight from the gut, and focusing on stripped-down jailhouse riffs, these two girls probably made Robert Johnson turn over in his grave.

Watching these kids at work is like watching Janis Joplin down a bottle of Jack. So, for your viewing pleasure, a live taste of The Pack A.D. is located below: