The Triumphant Return of Lisa McClowry! 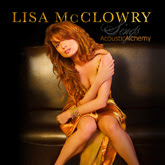 Chicago based singer/songwriter Lisa McClowry has performed on over twenty-five musical albums, intertwining soul, jazz, and pop genres within her eclectic vision of performance. She cites her own musical influences to include Ella Fitzgerald, Steve Perry, and Ann Wilson. In 2010 we brought you Lisa’s vampire themed video for “Born Twice” which showed her off her diversity as a performer and also showed that she keeps her finger on the pulse of pop culture and the beautifully crafted video, ‘Come Dancing’. This time around, we present two astounding video clips, “Brand New Hallelujah” and “Before the Tree Comes Day,” giving way to all that this incredible artist has to offer for the contemporary music scene.

Throughout the years, Lisa has collaborated with well-known musicians, making a name for herself in the music scene. McClowry has co-wrote and performed “Through the Eyes of a Child,” a song for the motion picture The Adventures of Rocky and Bullwinkle. She was also the singing voice of the princess in Rugrats in Paris: The Movie. Later, she served as the singing voice and voice over artist for the TRESemmé Shampoos and Conditioners TV Campaign and the national food chain Applebee’s. In 2010, Lisa was asked to co-star in a narrative short film featuring a four-minute dance sequence/music video at Joseph’s Café in Hollywood in a segment titled “Vampire Dance” for the new Twisted Tales series by horror legend Tom Holland.

McClowry works frequently with the Grammy awaed winning songwriter Jim Peterik of Ides of March and Survivor rock music fame. On June 22 of 2010, Lisa released her first solo album titled Time Signatures under the World Stage International Records/Big Deal Records labels, which was distributed by ADA. All of the songs on the album were either written by or co-written with Jim Peterik. Currently, Lisa McClowry has filmed two music videos for from her latest album Lisa McClowry Sings Acoustic Alchemy, and HIP Video Promo is proud to be one of the first to witness this plethora of incredible talent! Click HERE for the full bio!