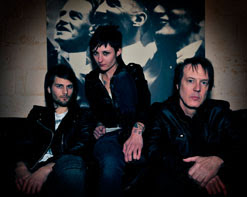 La Resistance’s so-called brainchild is that of Greg Summerlin. After releasing a number of solo albums on La Resistance’s current label, Superphonic Records, Greg had decided to take his musicianship to a higher level. Greg’s previous three albums received a large amount of critical approval and even appeared in numerous television shows and films, including network placements on NBC and ABC. However, Summerlin teamed up with two of his friends whom he had played with for several years. With the introduction of their debut album Philosophy, La Resistance has made it clear that they aren’t going anywhere. The album recalls the sounds of various well-known musical influences from the last few decades, yet it has proved to be Summerlin’s most innovative work to date; being that he produced and recorded the entire album himself shows how creative and dedicated he is as a musician. The companion to the debut album Philosophy is a recorded EP that consists of various covers of bands such as Joy Division, Gang of Four, and New Order performed by La Resistance. However, it is in their newest video for “Loathing” that we get a glimpse into all that La Resistance’s music truly encompasses.

“Loathing” is a song that represents freedom from the individual mind, and it is with such powerful lyrics and settings of scenes that we can understand just how in tune La Resistance is with their music. We watch as Summerlin transforms himself from an adult man into the young school boy that he used to be; the child is seen sitting in a classroom, looking out windows, dreaming about flying rocket ships, etc. The message of the video is extremely heartwarming, and the truth of the matter is that La Resistance reminds us that it’s okay to keep dreaming. We don’t have to be young anymore in order to attain the goals in life that we once dreamed about when we were young, and “Loathing” offers up these conjured suggestions.