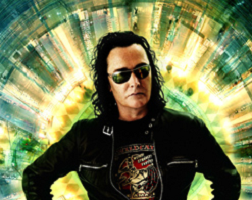 Juno Reactor are sonic explorers with deep roots in international club music, blending Eastern and Western influences. Way back in 2008, we had the pleasure of promoting their video for “Inca Steppa”, and that fall, we met up with Ben Watkins to film this HIP Clip video interview. On a busy street in New York while signing autographs, Watkins told us all about the new album Gods & Monsters, introducing new band members Squid and Sugizo, their improvisational live performances, and filming “Inca Steppa” in Kiev. Check out the Juno Reactor HIP Clip below!

“Inca Steppa” was the lead single from Gods & Monsters, which had been released in March 2008. It’s got a club beat that Juno Reactor fans will know and love, mixed with primal drums. The video celebrates the ancient Inca gods and goddesses, all done in widescreen and vivid technicolor.

We worked with Juno Reactor again in 2018, a full decade later, to promote “Let’s Turn On.” “Let’s Turn On” is taken from the Mutant Theatre album, which served as the soundtrack to their Mutant Theatre live show. It’s another dizzying, electrifying visual – this time, with plenty of lights and lasers to dazzle and intrigue you.