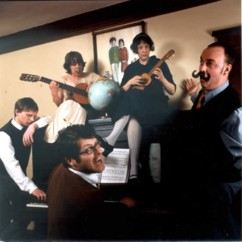 Here at HIP Video Promo, we’ve been working hard to promote music videos since the year 2000. It’s important to us to help younger and independent artists get the recognition they deserve, and it’s exciting to be on the ground floor with artists that become household names (and with over 3200 videos under our belts in 19 years, there are quite a few). On Thursdays, we’ll be sharing a “Throwback Thursday” video, where we get to reflect on one of our favorite videos from many years ago.

The American indie-rock group, The Decemberists, are always looking for ways to free their sound and get out of their comfort zone. After 17 years of being a band, frontman Colin Meloy wanted to make sure they wouldn’t fall into the same pattern and old habits. For their eighth studio album, I’ll Be Your Girl released in 2018, The Decemberists took on a new stylistic approach and innovative sonic range. Lead vocalist and guitarist Meloy, guitarist Chris Funk, keyboardist Jenny Conlee, bassist Nate Query, and drummer John Moen have always been known for their sense of scope and daringness. From a nearly 19-minute song “The Train” to their thematic albums, The Decemberists always release high quality of work, both musically and emotionally.

In 2011, Meloy wanted to take a break and focus on his personal life and individual career growth. He released a children’s book series that became the acclaimed, best-selling Wildwood trilogy. Despite the hiatus, the band was still active; they contributed “One Engine” to The Hunger Games soundtrack and even appeared in animated form on The Simpsons.

In April of 2005, we worked with The Decemberists with their video, “Sixteen Military Wives.” The very funny video is shot in a suburban academy where the band participates in the infamous: Model United Nations. Students take gym class in their argyles, and Meloy is the king of the linoleum-floored halls. Here he represents America in the mock U.N., and he takes the license to behave badly – imposing lunchroom “sanctions” on an unpopular rep, and “finding” hidden weapons (a slingshot) in his locker. When the rest of the world turns on Meloy, they do so with vengeance and leave him stranded in a heap of crumpled paper.

The Decemberists celebrate differences in their music video, “Once in My Life” released in the summer of 2018. A close friend of theirs, Autumn de Wilde pitched the idea of highlighting her brother Jacob, a 7’2” man with size 22 feet, dancing in the streets liberated, representing a much-needed holler against his perceived “otherness.” He tells his story, ignores the snickers, and runs through the town. In the video, “we see a man shrugging off the constraints of an unaccommodating and judgmental world and truly reveling in his body and mind.”