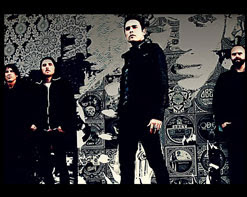 You read that headline right! Modern rock royalty, TRAPT, and their balls-to-the-wall new record, Reborn, are straight tearing up the charts – gaining huge and well-deserved attention. The critically acclaimed album hit number one just a few days ago on the iTunes Rock Chart, and these days, to accomplish such a feat is… well… damn near impossible with all the illegal downloading going down on the internet – making selling records all that much harder than it had already been. Luckily for TRAPT, their loyal fanbase are doing it the right way, showing the band the utmost respect, and obtaining the record the legitimate way: a bonafide purchase, with real currency. TRAPT clearly have some awesome fans, so congratulations to TRAPT – and their fans!
Show Your support and purchase Reborn HERE on iTunes.