Voxhaul Broadcast “Leaving On The Fifth”

New The Head and The Heart video! 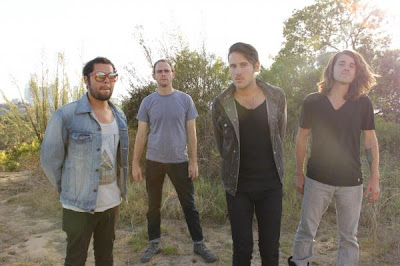 Buzz bands come and go, but L.A.’s Voxhaul Broadcast are shaping up to be more than just a flash in the pan. After a string of EPs, the boys from Silverlake are releasing their first full-length album ‘Timing Is Everything,’ and the timing really is perfect for this indie band to take it to the next level.

The album’s opener, ‘Leaving on the Fifth,’ is a melodic opus to serendipitous love and chance meetings. The band layers sonically balanced thumping bass behind the icy-hot melody line and singer David Dennis’ yearning vocals.

“The track is about meeting someone who you know you’ll have to say goodbye to the next day and making the most of the time you have with them,” guitarist and keyboardist Anthony Aguiar tells Spinner.

The video for ‘Leaving on the Fifth,’ directed by Justin Franklin, portrays a man and woman (played by Sam Buchanan and Matan Grunseit) meeting along an uninhabited coast, where they chase fireflies and run about the night.

“My inspiration behind the way in which I chose to direct this video was Thomas Edison’s ‘Serpentine Dance’ on hand-tinted film,” Franklin tells Spinner. “Its timeless beauty is both psychedelic and romantic. Each choice I made, from location to lenses, had to possess one of these elements which, in the end, would take the viewer on an emotional journey, seamlessly interweaving each feeling.”

Voxhaul Broadcast’s self-released debut, ‘Timing Is Everything,’ is available now.

Check out the video here…