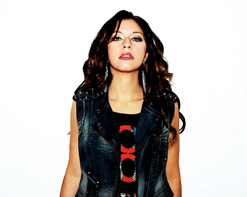 London Rose brings soul to pop. The Indianapolis based singer/songwriter will release her debut single “Kick Drum” on November 26th and true to the Thanksgiving holiday spirit will donate proceeds from sales of her song to the Philippine Red Cross. “I was fortunate enough to have lots of support in making this record and want to pay it forward, even if it’s in a small way,” London says.

London grew up with a deep passion for everything from Motown to blues. At 17-years-old, she formally kicked off her musical career. Over the next few years, she cut her teeth playing hundreds of gigs and supporting legends such as Earth, Wind & Fire, Chicago, Morris Day & The Time, KC and the Sunshine Band, and more. Meanwhile, the Pacers and Colts personally tapped her for multiple events including national anthems, and she garnered honors at the Great American Song Contest and the Unisong International Songwriting Competition. However, 2013 saw her songwriting talents bubble up to the forefront.

Heading to New York, she teamed up with the likes of Greg Camp [Smash Mouth] and Jeff Franzel [Josh Groban, N*Sync] to pen what would become “Kick Drum.” In the process, she harnessed her own sound. “Kick Drum has an energetic and really fun dance vibe, but there are some very emotional lyrics and ballads on the EP,” she affirms. “I wanted to do something that incorporated the energy of the music I grew up on with a modern feel.”