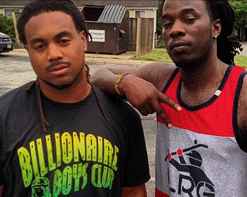 With inspiration from the golden era of fun and fresh hip hop from the 90′s, Indianapolis rap group P-IC is creating its own style of hip-hop. Based on honest and relatable lyrics and contagious hooks, their music is this year’s buzzworthy breakthrough for the hip-hop music scene. Have a look for yourself as HIP Video Promo introduces his latest clip, “Walkin on the Moon.”

The group is made up of UG, who was originally born in Uganda, and IC from Chicago, Illinois. UG and IC met playing college football and decided to leave their scholarships to pursue music. P-IC has had success doing shows regionally and nationally as well as opening up for The Game, Wiz Khalifa, Juicy J, Smoke Dza, Big Krit, Joey Badass/Pro era and Wale. They also have had the chance to be apart of the Smokers Club Tour while performing Smoke Dzas money down feat them, as well as performing at SXSW in Austin Texas.

Brought to us by P-IC’s own Skywalkin Music Group, “Walkin on the Moon” is a music video that echoes times of the past, present, and future. The clip follows wandering souls pursuing the quest of gaining knowledge, success, and even fame, but for now is just trying to get by. Throughout the song, P-IC asks questions regarding life, love, and soul searching. This is a duo who clearly takes pride in doing the right thing for the people in their life and who aren’t afraid to look inside himself to ask the tough questions. “Walkin on the Moon,” directed by Jace, is a clip that will surely leave you wondering about the curiousness of life.