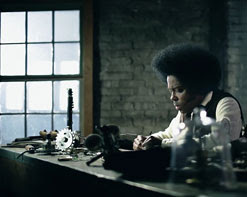 Alex Cuba is an artist who creates music from dreams that he has made come to life. From his earliest years in Artemisa, Cuba, Alex has been immersed in the music scene. His earliest performance was at the tender age of four, where he was seen on television playing the claves, which is a lively percussion instrument; he played along with a group of musicians created by his music instructor father.
He began to follow his own path after a stint with his brother, Adonis, where they recorded one album as The Puentes Brothers. However, his debut album, Humo de Tobaco, earned him a Juno Award for World Album in 2006, and his third album, Alex Cuba, was a Latin Grammy winner for Best Male Pop Vocal Album, and also nominated for the Best Latin Pop Album Grammy. He has produced a sound and a name for himself that is much like well-rounded musicians such as Jason Mraz, Craig David, and Ron Sexsmith.

In between tour dates and collaborations with artists like Nelly Furtado, Alex Cuba has found the time to record a third studio album featuring new grooves and electric guitar inflections. Alex Cuba receives much praise in regards to his live show. It is a constant success, in which he has been described critically as “explosive.” Alex rocks his lovely Gibson ES355 with the heaviest steel strings without a pick, and this explosiveness can be seen within his new video for “Are You.”

“Are You” is a song that captures a fairy tale essence with a romantic feel for music and is a standout track from the album, Static In The System. The chords are heavily constructed with traditional Cuban sounds and the undertones are incredibly endearing. Throughout the video, we see the side of Alex Cuba that likes to dream; he conjures a somewhat parallel universe between himself and a desired lover on paper. He literally draws images of a beautiful woman as she also draws images of Alex Cuba herself. This electrifying video captures a realistic possibility that two people can be drawn together through the forces of nature and the universe. These different worlds that the video creates makes us wonder just what Alex Cuba has in store for us next.

His beats are universal and it’s only appropriate that we include a second version of the video with the melodies delivered in his native Spanish language. This version is referred to as “Eres Tu”, and is every bit as tantalizing and exciting as it’s English counterpart. Alex gives a little bit of something for everybody and we’re proud to be a part of the team!