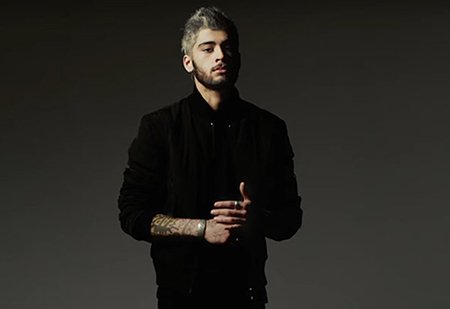 “PILLOWTALK” was up against hits like “Can’t Stop The Feeling” by Justin Timberlake, “Formation” by Beyoncé, and “Work” by Rihanna featuring Drake. Released in January 2016, it marked Zayn’s debut single as a solo artist following his departure from the British/ Irish boy band One Direction.

Although One Direction took a pop-rock direction, as a solo artist Zayn has focused his sound on the R&B / alternative R&B that he’s been passionate about since the beginning (he originally auditioned for The X Factor with “Let Me Love You” by Mario). It’s as pure, dirty, and raw as he promised, and leaves nothing up to the imagination.

Directed by Bouha Kazmi, the “PILLOWTALK” music video has reached over 690 million views on YouTube. It’s easy to see why fans voted for it as the Best Music Video in the iHeartRadio Music Awards: it’s sultry and seductive, though more artistic and less explicit than the song itself. Zayn co-stars in the video with his girlfriend and supermodel Gigi Hadid; the two make out as Zayn describes love as “our paradise and it’s our war zone”, and later cry red and black tears.

The visuals in “PILLOWTALK” are mesmerizing; kaleidoscopic footage of Zayn is layered with blossoming flowers, an image of a stud-covered Jodie Turner-Smith, broken mirrors, and smashing guitars. Many great music videos come out in 2016, but “PILLOWTALK” is certainly well-deserving of the iHeartRadio Music Award for Best Music Video.

Here at HIP Video Promo, we’re always looking for new and exciting music videos to promote. Maybe you’ll be next year’s winner of the iHeartRadio Music Award for Best Music Video. If you’re an independent musician looking for help with music video promotion, please contact Andy Gesner and the HIP Video Promo team at (732)-613-1779 or email us at info@HIPVideoPromo.com.