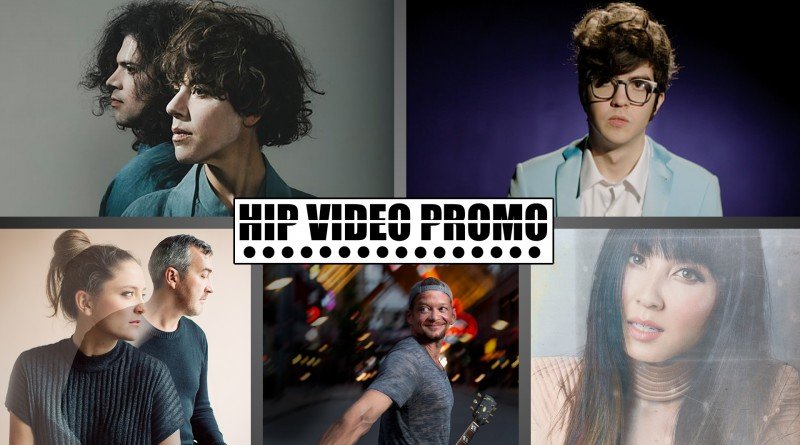 Time sure flies when you’re having fun, and it feels like just a minute since the year started – yet we’re already halfway through January. Now that things are back in swing after the holiday season, we’re as busy as ever- and loving every moment! This week, we’re sharing videos from some indie scene favorites as well as some up-and-comers that we think will soon cement their place on top. The newest HIP Picks – Weekly Client Roundup video gives you the low-down on some of our current projects, and we’ll tell you a little bit about each one below.

From self-releasing her first album on recycled cassettes to reaching #4 on the US Billboard Alternative charts with 2014’s Nikki Nack, Tune-Yards have had a steady commercial and critical rise. In advance of the January 19 release of I can feel you creep into my private life, they’ve shared the video for “Heart Attack”; and while the subject matter is intense, it’s ultimately music to dance to. Described by Rolling Stone as “ecstatic”, the “Heart Attack” video (directed by Mimi Cave) uses a palette of 80s-inspired colors to show the various characters struck down by a funky case of cardiac arrest.

Will Toledo, the driving force behind Car Seat Headrest, is nothing if not prolific: since he started the project in 2010, he’s recorded and released a dozen albums on Bandcamp. This time, instead of creating new songs, he’s decided to revisit an old favorite: the 2011 masterpiece Twin Fantasy has been re-recorded and re-imagined for an upcoming re-release on Matador Records. He’s also shared the video of “Nervous Young Inhumans”, a frenetic yet anthemic clip that marks Toledo’s first directorial effort. Done in a split-screen style, “Nervous Young Inhumans” shows dueling shots that are sometimes juxtaposing and at others, perfectly in sync.

You may not know the name Tiny Fighter just yet, but chances are you will soon: this Australian and Swedish pair consisting of Tim Spelman and Therese Karlsson have already begun building a reputation for their intriguing blend of straight-up pop with darker musical themes. Catchy yet bittersweet, their latest single “New Century” encapsulates the tension between resignation to unfulfilled desire and the drive to take control of one’s destiny. Filmed using a 360 degree camera, the “New Century” video is a unique, visually spectacular clip that distorts and reimagines natural and urban landscapes, resulting in dream-like exaggerations that serve as a metaphor for the desires that are just out of reach.

Years of training can build skills, but it’s unbridled passion and love for the craft that make true artists stand out. Natalise Kalea began her musical journey at age three, playing piano, and after training at the San Francisco Conservatory of Music, she and her band Natalise + the Sunset Run have landed songs on commercial radio stations, played countless shows around the country, and landed songs on networks like MTV and The WB/CW. Natalise + the Sunset Run’s latest effort, “Be”, is sure to resonate with the dreamers and doers – those always aiming for more – and fittingly, the clip was filmed in New York, a city full of those working to achieve their dreams. As Natalise walks around Manhattan and Brooklyn, “Be” follows aspiring dancers en route to the studio; even when it’s rainy and the skies are grey, they have a light within that propels them forward.

Though influenced by rock and roll, Louisville, Kentucky native Bryan Fox is a country musician at heart. He first shared the song “I Saw My Ex-Wife Workin’ At The Bass Pro” on his 2010 album Big City Lights; when it came time to create a music video in early 2017, he dug into his whole catalog to find the song that would make the best visual and quickly settled on “Bass Pro.” When the corporate powers-that-be wouldn’t allow filming in their store, he reworked the song as a parody, “I Saw My Ex-Wife Workin’ At The Bait Pro” and got to work. Shot at a mom-and-pop bait store in Arkansas, everything is exaggerated just enough to make it clear the story is a work of fiction. It’s clear from “Bait Pro” that Bryan Fox takes everything seriously… except himself!