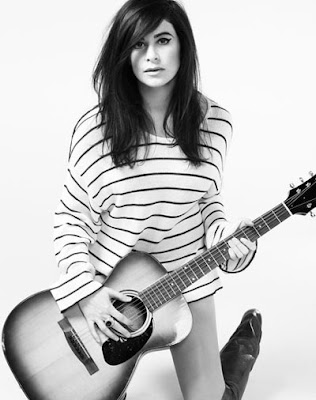 Alyssa Graham is an artist who we have immense respect for even before ever hearing a note of her music. Her story is oh too familiar to so many artists who have seen their years of hard work slowly ripped apart by the agenda of a major label and their influence. In Alyssa’s case the breaking point came when she was working hard in the studio on some tracks for the label that was behind her early hopes. She was able to brush aside the constant input about which current artist she needed to emulate, but when the conversation turned to choreography (yes, choreography), that was the end of that experiment. She walked away and never looked back.
Unlike most artists in that position, however, Alyssa never let it hold her back from continuing to hone her craft and find the inspiration to make the music she really wanted to make. Instead of shiny and glossy pop, she teamed up with producer Craig Street to make an album that “has hairy armpits”, and has all the hallmarks of the albums of old from artists Alyssa loves such as Neil Young, Nick Drake, Bob Dylan and others capable of delivering heartfelt emotion in the simplest of packages. It also features a dynamic group of backing musicians including the ever amazing MeShell Ndegeocello on bass, as well as guitarist Chris Bruce (Sheryl Crow and John Legend) and keyboardist Keefus Ciancia (Elton John and Iggy Pop). Rounding out the bunch is her longtime collaborator and lead guitarist Doug Graham. The end product, Lock, Stock & Soul, is everything that a true music fan would love and appreciate, and none of the vapid shallowness that threatened to derail her young musical career. She has been acknowledged as one of iTunes’ “New and Noteworthy” singer-songwriters as well as a Critics’ Choice by The New York Times. In addition, she has also been called an artist “You Need To Hear” from Marie Claire and a “Music Pick” by Elle Magazine. All in all, we’d say that Alyssa is doing just fine since making the choice to be “the artist I wanted to be”.
Her new single “Round & Round” is a delicate song featuring a rich and lush sound, achieved with simple instrumentation that is used sparingly. Appropriately the video is modest in its approach, yet incredibly effective in its delivery. There are no great tricks being pulled, but rather a vivid splash of bright colors and radiant lighting throughout that gives it a fulfilling vibe. The theme of the video is rather literal, with a regular variety of circular objects being featured and put front and center. Whether it be the Mardi Gras themed characters spinning effortlessly inside the various hula hoops on set or the inflatable beach balls floating on the water (one of them even has Alyssa seated inside of it!) the whole video is all about going around and around, much like the catchy little hook that this song sings to us. It’s a testament to Alyssa’s belief that less is more and that sometimes a little inspiration goes a very long way! Click here for Alyssa’s official client’s page on HIPVideoPromo.com