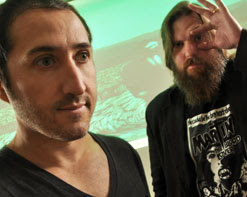 Greetings programming friends, it’s Andy Gesner and the HIP crew with some very exciting news for you! One of our all time favorite clients is at it again—from the new album Information Retrieved, Pinback presents a full throttled account of space invasion and exploration in the upcoming video “Sherman.” In the past they brought you some of the most invigorating and inspirational songs such as “Penelope” and “Fortress,” and their newest innovations echo their timeless sense of outstanding musical creation. Both Rob Crow and Armistead Burwell Smith IV have earned special places in our musical hearts!

NPR Music says, “Pinback’s leader, Rob Crow, has carved out a distinct identity as a storyteller with a unique sound,” and it isn’t hard to recognize his ability of crafting artful stories through their captivating music. Over the years, Pinback has maintained a unique sound that has been influencing thousands of new artists. Quickly establishing themselves with Blue Screen Life and Summer In Abaddon, Pinback found the most creative way to express lasting music that has proved itself timeless. The band’s moniker is a reference to the cult classic 1974 film Dark Star, directed by John Carpenter. Audio samples from this film have even been featured throughout the band’s early works.

Pinback’s fourth full-length album Autumn of the Seraphs was released in early September of 2007, hailed by Pitchfork as “uniformly gorgeous.” But since then, it has been a long five years for diehard Pinback fans waiting for new material. Fortunately, as we’ve come to expect from this elaborate duo, the new release titled Information Received is well worth the wait, and may even be their strongest effort yet! It marks their first release for Temporary Residence Ltd. who also brought you the Explosions In The Sky “Last Known Surroundings” video in 2011.

The new video for “Sherman” was largely inspired by the low-budget films of the Cold War era without any CGI special effects—all visual effects are in-camera! Directed by Matt Hoyt of Wormwood Films, “Sherman” pays homage to the monumental elements of science fiction fantasy. Read the full bio HERE.