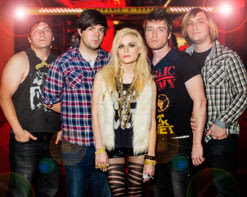 In these modern times, contemporary music needs some sort of twist in hilarity that can pull all the types of music genres together, and that’s exactly what The Vettes, formed of family members, does. The contemporary music label 33rd Floor Records brings you a band that is up to speed with the modern age, but reminiscent of the music from past decades. With influences that range from bands such as Flock of Seagulls and Aha, to artists such as Oasis, Elastica, and Duran Duran, The Vettes is the first new wave of power driven alternative-rock to come about within the indie-rock music scene.

The Vettes include Rachel, Todd, Chad, Mitch, and Brian Vette, all sister and brothers with the exception of Mitch who was honorably adopted into the band after joining in 2005. Lead vocalist and sister Rachel Vette explains, “In order to fully grasp the concept, one must first dismiss the preconceived notions of all the real life and fictitious family band stereotypes we’ve all come to know and hate.” Each member began joining one another in creating and performing music early throughout their late teens and early twenties.

Since 2005, The Vettes have been turning heads and making a concise name for themselves throughout their hometown in New Orleans, Louisiana, as well as throughout the US. The Vettes have released a countless number of demo CDs before the official release of 2008’s T.V. EP and 2010’s full-length PLASTICVILLE. They were seen performing at 2011’s Voodoo Fest in Louisiana, sharing the stage with well-known acts such as TV on the Radio, Soundgarden, and Odd Future. This year they are upping their game, performing at 2012’s Voodoo Fest alongside such heavyweights as Metallica and Silversun Pickups, as well as K’naan, Justice and more! Their newest single, “Textual”, was produced by one of the hottest and most in-demand producers, Junior Sanchez (Katy Perry, Madonna, Good Charlotte), and is sure to bring The Vettes an even loftier position with their fanbase. Read the full bio HERE.