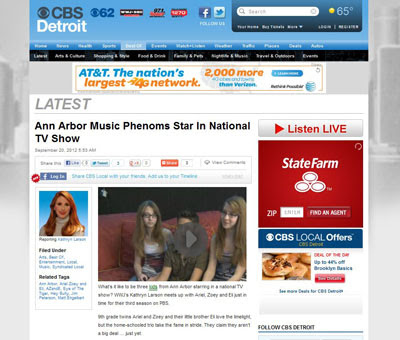 HIP faves Ariel, Zoey & Eli were recently interviewed on CBS Detroit where they elaborated on some of the wonderful things they’re doing in their national hit show. Check out an except below:

— What’s it like to be three kids from Ann Arbor starring in a national TV show? WWJ’s Kathryn Larson meets up with Ariel, Zoey and Eli just in time for their third season on PBS.
9th grade twins Ariel and Zoey and their little brother Eli love the limelight, but the home-schooled trio take the fame in stride. They claim they aren’t a big deal … just yet.

Their dad and manager Matt Engelbert says his children really don’t know know the half of it. “I think they get a kick out of it. They don’t talk about it. They’re strangely humble about all of the excitement that goes along with what they’re doing. When they have a show, there’s always a huge line afterwards with kids wanting them to sign everything from their shirts to thier arm to their teddy bear.” Engelbert said. —

These kids are the real deal.
Click here to see the whole interview!