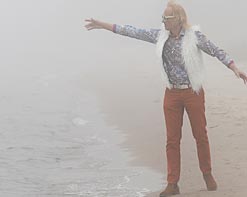 By now, we’ve told you the story of AV Super Sunshine, and how he grew up reveling in classic rock, then spent many years battling a variety of afflictions that cut him off from much of the outside world. When he did re-emerge, it begin in a simple weekly coffee house series in small town Wisconsin. He fought his way out of that hole not only for his own well-being but because he genuinely believes that he has the power to create music that can help others, like it helped him. His newest EP, Just Like Kurt, and the accompanying video, are proof positive that his music is powerful enough to make a change for the better.

Although his path may have been unconventional, it has brought him to a good place, and it has brought out the best music he has inside of him. “I read an interview with David Bowie. He made a comment that he was just trying to write from the heart, but that because he was a human, if it moved him, it would have to move other people. I believe that. I try to write songs that other people understand and maybe help them with my experiences.”

His previous two videos for “Baby Goodbye” and “Sink Or Swim” were both fabulous examples of taking classic rock influences from bands like Zeppelin, Aerosmith, Cream, Bowie, and others and combining them with a modern production and performance aesthetic. For his newest video, “Just Like Kurt,” AV makes the subject more personal than ever before.

“Just Like Kurt” places AV on a dark city street, effortlessly grooving and connecting to the music. At times illuminated by nothing more than the headlights of a Geo Tracker at their side, they are in their own world. The trains pass by, the shadows project like giants on the wall, but they are immune to it all as the music consumes them. Like an admission of his past struggles, AV tunes out the world around him as he is taken by the sound. Only this time, the music is injecting him with life and optimism.

We are excited to once again be working with AV Super Sunshine to bring you this thought-provoking new video and encourage you to get in touch to let us know what we can do to get it into your programming! Please contact Andy Gesner and the HIP Video Promo staff at (732)-613-1779 or email us at info@HIPVideoPromo.com . You can also visit www.AVSuperSunshine.com for more info.