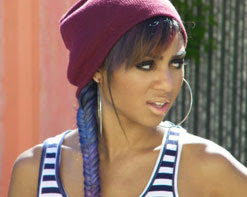 “A Beautiful Gangsta is a dominant female who is Beautiful inside and out. She is a confident independent warrior. She has strong opinions and voices it. She fights her own battles. She is classy and has a soft side, but at the same time, she doesn’t take any crap. People say it’s a man’s world, but it’s nothing without a powerful woman by his side.”

These are the words written by Chelsea Tavares to describe her new music video, “BEAUTIFUL GANGSTA” a song that she co-wrote and performed.

At the mere age of ten, Chelsea made her Broadway debut with the Los Angeles’ Original cast as the lead of Young Nala in Disney’s Lion King at The Pantages Theater. This terrific actress has three series regulars “Unfabulous and Just Jordan” under her belt, Shot “Fright Night” for DreamWorks, Guest Starring on CSI Miami, Recurring role as Andrea on CW’s “Ringer” and was the new lead, as Jordan Randall in the ABC Family’s “Make it or Break it”!

Her lead vocals have been featured on the soundtrack of CW’s Nikkita on the song “Last Shot.” She has also collaborated with the likes of B. Howard and the Internationally acclaimed Mendes Brothers. Her love of all genres of music show true in her writing with a stylish mix of pop, rock, and R&B. Chelsea’s sultry vocals seem to be coated with velvet, as her lyrics speak of love, strength, confidence, empowerment and independence.

Radio friendly, “Beautiful Gangsta” , with a dope beat, undeniable hooks, memorable melodies and again those outstanding vocals displays Chelsea’s determined personality as one that will not go unnoticed.
Actress, Singer, Song/writer, Performer, this Beautiful Gangsta strives to leave her mark as she boldly continually moves ahead towards the next project.