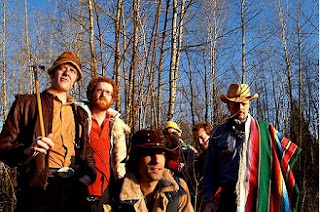 Blitzen Trapper sung and strummed at NPR Music’s day party in Austin, Texas, at South by Southwest. Now NPR wants to share the concert recording on cyberspace. Go to their Web site to have a listen.

Blitzen Trapper makes rustic, wild folksy music, highly influenced by classic rock greats like The Grateful Dead and Neil Diamond. While listening, you may picture yourself on a grassy knoll in the Blue Ridge Mountains. Or sitting in the woods with plaid on, chewing hay.