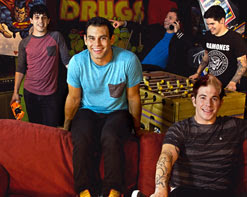 Greetings programming friends, it’s Andy Gesner and the HIP Video Promo crew bringing you a sentimental new clip from some of our favorite rockers! Whether it be “Douchebag,” “Dance Til We Die,” or the emotionally charged and socially conscious “One Less Heart To Break”, we’ve seen that everyone finds it easy to gravitate towards the pop-punk powerhouse of these Long Island, NY natives. They’ve earned a slew of high profile video placements throughout the entirety of their musical career on MTV2, mtvuU, FUSE, Much Music, and all the finest music video outlets across the land. Most recently, Patent Pending was awarded the Dreamseaker Artist of the Year award at the 2012 Billboard Music Awards at the MGM Grand Hotel & Casino in Las Vegas, Nevada. The band has released eight music videos throughout the course of their musical career, and from the release of their newest album Second Family, comes “Spin Me Around.”

“Spin Me Around” is a song that maintains the existence of true love and offers ideas on the future of matrimony. Patent Pending has been an honorable pop-punk band originating from the basements of Long Island, New York. Their instantly recognizable name that they have made for themselves in the pop-punk music scene has landed them performances on nationwide tours with bands such as Gym Class Heroes, Cobra Starship, Zebrahead, and Bowling for Soup, and countless other bands within the realm of the pop-punk genre. Their constant presence on the Vans Warped Tour has landed them expected performances at the festival every year. Full bio HERE.

Music video coming soon; we’ll alert you when it premieres on Billboard.com!