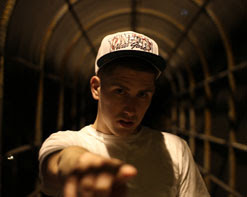 Bronx, NY native That Kid Era combines storytelling and wit in his new single “Caught My Eye.” Having grown up during the New York golden age of hip-hop music, this twenty-two year old MC proves to be versatile, rapping over the influential musical sounds from Dubstep to classic hip-hop. Here at HIP, we’re all very excited to present you with the release of the video clip “Caught My Eye,” a powerfully emotional account of That Kid Era’s encompassing demeanor.

Born in the Bronx and raised in Westchester, NY, That Kid Era began writing music at an early age. After the death of his father at the mere age of ten, Era began taking comfort in the art of songwriting. It wasn’t until high school when he started recording tracks in a friend’s basement in New Rochelle. With the assistance of Danny G & Up North Productions, Era began releasing recorded music videos and local albums, gaining him much appraised appreciation throughout New York’s underground hip-hop scene. He established a notable buzz throughout the tri-state area, all the while building a credible name for himself.

Since then, Era has released a multitude of mix-tapes, encouraging his fans to promote and keep classic hip-hop music alive. Two of his songs have been featured on radio stations such as Power 105.1 and NOW 92.3 FM, and today, his music continues to expand within the realms of the Internet. With the release of several videos on YouTube.com and performances throughout the tri-state area, That Kid Era is sweeping the streets of New York and gaining recognition wherever he performs. Era sees no boundaries in his music, and his music can be heard within any setting—from the club to the barbershop, from the city to the suburbs. In this most recent clip “Caught My Eye” featuring artist Ian Smith, we experience as viewers all of the elements of classic hip-hop that That Kid Era’s music contains. Full bio HERE.