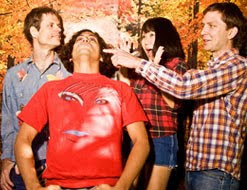 Some of you may be familiar with the band from their video for “Wrong Time Capsule,” a clip we have promoted several years ago. These innovative rockers have been shaking the globe for well over a decade, and have reinvented themselves once again with the brand new video for “Super Duper Rescue Heads !”

If there’s one thing Deerhoof isn’t afraid to do – it is bold experimentation. On one of their records, the band recorded separate songs in the left and right channels, so that the listener will hear a different song simultaneously in each ear! While this sort of wild and witchy dabbling can often result in a gray mess, the band has always managed to pull off their craft successfully. Pitchfork went so far as to label Deerhoof as ““the best band in the world.” This is also a band that David Bowie personally invited to play the Highline Festival in New York City. The group has done many national and international tours, including opening slots for Wilco, Radiohead, The Roots, The Flaming Lips, and Bloc Party to name a few. Deerhoof have been a press favorite for the past several years, with each release being highly critically acclaimed by the likes of The New York Times, Pitchfork, Alternative Press, SPIN, and NME. full bio HERE.