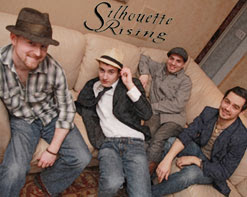 James from Silhouette Rising recently updated their fans on the group’s upcoming TRILOGY of EP’s that will be available in the not-too-distant future in a blog post he posted. Lot’s of exciting news! Check it out …

“The more things change, the more they stay the same.” That sentiment rings true on Silhouette Rising’s latest effort. The group is currently recording the first, of a concept EP trilogy titled Happiness. It’s the ongoing internal struggles the group has always faced that inspires their latest effort.
Silhouette has always struggled with line up changes. The difference is this time they embraced it and created a pop album with it’s darkest overtones to date. “This album deals with all the heavy things that most of us don’t care to talk about. It’s an album about relationship struggles, depression, sex, drugs, rock and roll…the heavy stuff.” On the last album lyricist, James DiNanno took a lighter approach. This album gets up close and personal. Brother, Rob DiNanno shapes this EP with funky melodies on the keyboard.
The group went back to their roots for the upcoming release, and began writing like it might be the last album they get to make. They will begin shooting music videos for the first two singles “Rehab” and “Kentucky” within the month. The videos will closely follow the satirical approach the group took on the “Ode To Vandalism” videos.
“Happiness I” is due out early December with a single release in late November. Silhouette Rising plans to follow it with a tour alongside acts such as Spots, The Life Electric, and potentially some shows with Jamestown Story.