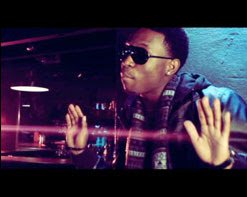 Rising hip-hop artist Trigg Da Kidd has experienced a plethora of life altering struggles, yet he has hustled his way to the top within the contemporary hip-hop scene. Keeping his roots from Michigan and North Carolina close, Trigg has developed a fresh and unique style that has led his musical career to utmost importance. HIP Video Promo brought you “Racks and Rubberbands” and “Alien Is” earlier this year, and with the release of three upcoming videos, Trigg Da Kidd has made himself an influential staple on the hip-hop music scene.

With a sound reminiscent of Lil Wayne and references to classic hip-hop all stars such as Run DMC, Trigg Da Kidd has made his own set of rules. After a series of brief crime sprees during his youth, Trigg realized his personal endeavors, or lack there of, were taking the place of his life-long dreams of musical creation. Trigg cleaned up and spent time working on the creation of his first debut album titled Ceilin Fans. With the promotion of several college tours, he collaborated with label mate Brandon Thomas and founded the E365 Empowerment Group for troubled teens. In time, he created music that served the purpose of guidance for troubled youth.

Trigg Da Kidd’s previous video “Racks and Rubberbands” won the mtvU Freshman voting contest, and from the highly anticipated mixtape Trigganometry 101, HIP Video Promo presents three of the most entertaining videos that Trigg has ever released known to date. In “What Yo Name Is,” Trigg presents viewers with a clip that is fast paced and exciting. We watch as this rising artist hits the clubs, seducing women as he stylishly moves from club to club. The idea of swag is constant and Trigg maintains this mentality in a way that is utterly contagious. The musical elements of “What Yo Name Is” capture timeless beats reminiscent of classic hip-hop.

The second clip “Stonerz Night” follows Trigg throughout the excitement of a house party. The fluorescent lights add a certain energy to the song, making it easy to be heard from club to club. “Fired Up” is the third video and it contains all of the pyrotechnics to make you feel on edge. From fire to bright lights, Trigg is dressed all in black, lighting the entire hip-hop scene on fire in this menacing, yet charismatic clip. Combined, the videos all represent the fluidity of Trigg Da Kidd’s demeanor, and his flow and vocals are undeniable. Click here for the full bio!