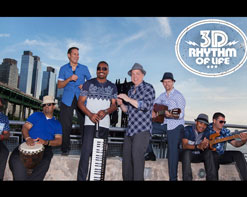 Michael Tate & 3D Rhythm Of Life present their “Latin-Tropical-Soul” video and single FANTASY, the first of it’s kind. Originally recorded by the super group Earth Wind and Fire, FANTASY has become a mega hit and an international favorite. With the recent passing of EWF founder Maurice White, Michael Tate’s new release is now more than ever a tribute to its original creators.

Michael Tate and guitarist Chris Amelar formed 3D Rhythm Of Life in 1999. The group has created a unique style by infusing island grooves, funky latin pop, and what they like to call “Riddim & Blues.” Keyboardist Lenny Underwood’s contributions are also an integral part of the band’s sound. Their pedigree is nothing short of impressive. Members of the group have performed and recorded with major artists that include: Marc Anthony, Jennifer Lopez, Kid Creole and the Coconuts, Chaka Khan, Whitney Houston to name a few. The single “Fantasy” was produced by Grammy award winning producer Ricky Gonzalez and is included in the soon to be released album (Spring 2016).

Directed by Tane Martinez and produced by Michael Tate, “Fantasy” was filmed in NYC at the Triad Theater and on the Hudson River. The backbone of the “Fantasy” video tells the story of a captivating musical experience. The band’s camaraderie and connection is unmistakable as they rip through an impassioned interpretation of this classic tune. Alongside the performance are concurrent narratives of ordinary folks realizing their own personal fantasies. Whether it’s a heart broken young women who eventually finds happiness, or a young couple transformed into a dynamic pair of Latin dancers, they all represent the same positive and uplifting message inspired by the song.

We’re so excited that Michael Tate & 3D Rhythm Of Life has brought us along for this wildly wonderful ride! We would love to do anything we can to help get this video into your programming, so please don’t hesitate to get in touch with Andy Gesner and the HIP Video Promo team at (732)-613-1779 or email us at info@HIPVideoPromo.com .