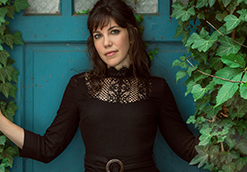 Addi McDaniel’s radiant clip for “Are You Serious”, her latest single, is, unmistakably, a love letter to New York City. If you were McDaniel, you’d probably be in love with New York, too. The native Floridian musician has been embraced by her adopted hometown and recognized as one of the most enchanting new songwriters and interpreters in the city. As the singing half of the acclaimed voice-and-harp duo Addi and Jacq, she’s the voice of WNYC’s “Best Emerging Band in New York”. The list of places she’s played reads like a tourist’s guide to New York City culture: Carnegie Hall, Joe’s Pub, the Brooklyn Academy of Music, The Metropolitan Opera, Birdland, the Apollo Theater, many other legendary stages. “Less Likely Places”, the title track from the duo’s debut album, was inspired by a New York Craigslist ad. That’s how immersed in local culture she is – McDaniel even sees the poetry in online classifieds.

And today, she’s sharing a version of Andrew Bird’s witty “Are You Serious” that could only have come from a New Yorker. Not only does McDaniel emphasize the jazz and blues roots of Bird’s indie rock composition, but she highlights its essential theatricality, too. The result is a rendition of “Are You Serious” that would play equally well in a Brooklyn club or an off-Broadway theater. The song is one of the many standouts on After The News, an extraordinary solo set that presents McDaniel as a musical polymath with a broad emotional and interpretive range. No matter how exquisitely and imaginative these tracks are arranged, producer Marco Giovino (Robert Plant, Norah Jones) has directed the spotlight wisely — right on to the star, and her brassy, soulful, irresistible voice.

Though Nick Spanos’s clip for “Are You Serious” is only four minutes long, it covers plenty of territory. This is New York City at its most glorious and autumnal: not just bridges and skylines and crowded intersections, but also public parks and secluded spots that whisper at the viewer like a secret-keeper. That’s the duality of the city, and it’s one that every true New Yorker knows. How can a place be so dramatic and larger-than-life, and simultaneously feel so intimate and private? You could ask Addi McDaniel. She’d have her own answers, because all New Yorkers do. She’s committed to unraveling the mystery, and she’s taking us all along on the journey.

We’re always excited to introduce ambitious, innovative, accessible artists to our programmers and their viewers and Addi McDaniel ticks off all of those boxes in a big way. Please do get in touch to let us know what we can do our end to help get the “Are You Serious” video into your programming. Please contact Andy Gesner and the HIP Video Promo staff at (732)-613-1779, email us at info@HIPVideoPromo.com. You can also check out AddiMcDaniel.com for all things Addi McDaniel.