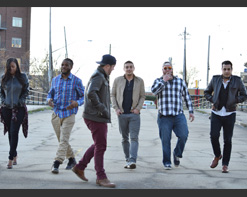 ATL isn’t just an acronym for Atlanta, Georgia, it also stands for All The Locals. This pop/rock band comes to you straight out of ATL’s local hangouts, and they want to show you their roots. “Everybody likes a new groove or place to hangout…So, why not where the locals go?”

Performer Mag called them “Soul food for the pop punk mind,” but ATL prefers the soulternative genre. While the band is entirely Atlanta locals, their reach is far and wide. In 2015 TouchTunes announced ATL as the interactive breakout band, and in 2016 they were the GA Entertainment Music award winners, presented by their own ATL Mayor Reid. The motley bunch even represented their city with SESAC at both CMJ and SXSW fests! Next they’ll be hitting the road in August for a 2017 tour under new management with Bread and Circuses, one of the top music consulting firms in the USA. Everyone will surely be checking them out, hoping to hear their new single “Weatherman.”

The video for “Weatherman” begins with a deconstructed Buffalo Springfield inspired riff. Next you see lead singer Johnny Schmarkey caught in the rain, followed by backing from mates Ty Barksdale n’ Mike Fiorello, bassist Yosh Benjamin, drummer Justin “lunchbox” Bradford, and symphonic vocalist Ms. Nikki Brickhouse. The video is a performance and a story wrapped into one package of rock n’ roll. “Whether it’s your spouse, friend, colleague, or a pet…Everybody has someone they rain on at the end of the day,” says ATL, “We’re all faulty weathermen.” The heartfelt lyrics, written by Johnny, and blues-y vibe will bring out your southern groove.

If this is what they’ve got going on in Atlanta, get us on a plane! Here at HIP Video Promo we are elated to be working with such cool and talented musicians in All The Locals. ATL will be on tour starting August, so be sure to check them out when they visit your market. Contact Bread and Circuses at www.facebook.com/breadandcircusesinc for press or booking opportunities with All The Locals. For more information please contact Andy Gesner and the HIP Video Promo team at: (732)-613-1779 or email us at info@HIPVideoPromo.com.

Visit All The Locals