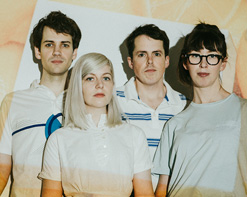 Toronto-based indie-dream-pop band Alvvays scored a new epoch with their new release, Antisocialites. Dreamt up by an anti-social teen playing records in their head to escape math class, the wavy guitar tones and sugar coated melodies deliver tales of isolation and loss in the way of a pastel daydream. The band’s new single, “Dreams Tonite”, brings the visual representation of these dreams to tangible form.

The new music video for “Dreams Tonite” centers around the world famous 1967 International and Universal Exposition. More commonly known as Expo 67, this was a general exhibition, Category One World Fair in Montreal, Quebec, CA, from April 27th to October 29th, 1967. A true accomplishment of the modern world, Expo 67 attracted over 50 million attendees from all around the globe. The population of the entire sovereign nation of Canada was about 20 million at the time, to put things in perspective. This set a record for World Exposition attendance that remains unchallenged to this day.

In 2017, the 50th anniversary of Expo 67, Alvvays have so tastefully honored this modern marvel in their “Dreams Tonite” video. Featuring loads of archival footage from the original event, the video allows you to relive the Expo with a wonderfully warm, grainy, film experience. One of the coolest aspects of this video, is that the band appears to be performing and attending the Expo. These shots of the band present at the event are so realistic, one might wonder if they hopped into a time machine for filming.

Lyrically, each word completes the vibe of the song and video. Harking the name of the album in a line, “On the lead guitar / Said you’d go to work / In the waking hour / In fluorescent light / Antisocialites watch a wilting flower”, “Dreams Tonite” is the keystone in the foundation of this record. The innocent droning of, “If I saw you on the street, would I have you in my dreams tonite?” undoubtedly leaves listeners meditating on that question for weeks.

We are absolutely ecstatic to be teaming up with Alvvays once again to bring you the “Dreams Tonite” music video, and see it included in your regular programming. Don’t hesitate to let us know what we can do on our end to make that happen. Please contact Andy Gesner and the HIP Video Promo team at (732)-613-1779, email us at info@HIPVideoPromo.com. You can also visit www.Alvvays.com or www.PolyvinylRecords.com for more info on Alvvays.

For info about other Alvvays music videos, click HERE