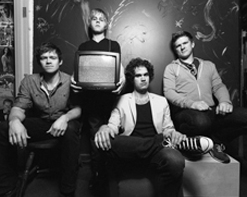 With comparisons to contemporary indie favorites like OK GO and Phoenix and mixing classic hints of Elvis Costello, Antennas Up is this year’s on-the-rise band in the pop/electro/rock genre. From the new album The Awkward Phase, HIP Video Promo presents their newest clip for the endearing and beguiling single “Coming On.”

After the release of their first album in 2009 the band took to a cabin in the woods of Maine for a month of isolation and songwriting, honing in their ideas for a new album. The fruits of their labor, The Awkward Phase, spent over ten weeks on CMJ’s “Top 200 List.” With over three thousand copies of their debut album sold, their music has been featured on the television series Gossip Girl, MTV2’s Underemployed, was featured on iPhone’s best selling music app “Tap Tap Revenge 3,” and the independent film “Falling Overnight.” In 2012 alone, Antennas Up performed at over thirty universities and toured alongside Girl Talk, Flogging Molly, Electric Six, Matt & Kim, and Ha Ha Tonka amongst others. Their video “Coming On” just recently premiered on PureVolume, and HIP Video Promo is pleased to introduce the band’s new music video clip.

Directed by Chris Mullins, “Coming On” follows a young man through an urban neighborhood who has just awoken on a couch in the middle of the street. Everything sounds normal, but he sports a unicorn mask throughout the entirety of the clip. The video portrays him running around and collecting white balloons. The young man finds himself in his apartment surrounded by white balloons and women wearing nothing but bikinis. Every thing seems to be fine, until the young man whispers something provocative in one of the women’s ears and is thus slapped in his unicorn snout. He is then left alone as someone else cleans up his own mess. “Coming On” is a very contemporary portrayal of life in the city—social extremities are portrayed as sad undertones reflect the basis of the clip. As he tackles his “daily woes,” he is still stuck with a unicorn mask on, exemplifying how hard it is to be yourself in such a lonesome city.

The new album The Awkward Phase is available on iTunes, Spotify, and Amazon, and to celebrate the anniversary of the album, they band is offering autographed copies for just $5, for a limited time only! Of course, we’re happy to hook you up with your own copy, just get in touch! Please contact Andy Gesner and the HIP Video Promo staff for any upcoming news and information on Antennas Up at info@HIPVideoPromo.com.