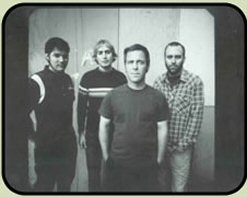 Tenacious and tuneful, Arlo are a bouncy, optimistic power pop band from Los Angeles. Their new video for the Beatles inspired “Linger On” is as hilarious as it is uplifting. Any band that named itself after a sound man is already on my good side. That being said, the inevitable first impression is that these thoughtful rockers are awfully friendly (they even seem to get along with giant mutant critters). The friendliness extends to the music…all 12 tracks on Stab The Unstoppable Hero just reach out and shake your ears and beg the listener to fall into the song and become one with it.

It’d be easy to pigeonhole Arlo as a “psychedelic revival” band, but that would be too narrow a characterization by far. To be sure, there are echoes of early Pink Floyd, enough to give the impression that Arlo may have been among the “Species of small furry animals gathered in a cave and grooving with a Pict”. But they display none of the arty pretension that burdens many similar bands. Rather, the songs are hook-laden; the interplay of the guitars is endearingly seamless and deceptively complex. The lyrics are witty and charming, but with just enough of a sardonic edge to bring a grin to the face of even a hardened cynic.

Arlo may, in fact, be on their way to BECOMING The Unstoppable Hero. The video for “Linger On” is clever and downright funny, due in large part to the director on this project, John Lindauer. Lindauer cut his teeth working on Pee Wee’s Playhouse and brings the same kind of irreverent cartoon-like aesthetic to the “Linger On” clip