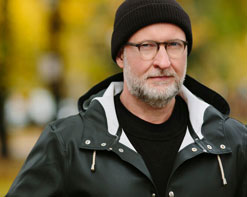 Sometimes it’s best to let the artist do the talking, so to give a little background on the new “Voices In My Head” video and album Patch The Sky from Bob Mould, we’ll simply share his own words:

“After the Letterman performance in February 2015 where “dust fell from the rafters,” it would have seemed logical to go the punk rock route—an entire album of two-minute songs—but that wasn’t where my soul was at.

I withdrew from everyday life. I wrote alone for six months. I love people, but I needed my solitude. The search for my own truth kept me alive. These songs are my salvation.”

“Voices In My Head” is a video that tackles one of the darker subjects that Mould addresses. There’s no veiled references, it’s a headfirst assessment of a complicated state of existence that he no longer runs away from. Instead, he acknowledges them for what they are and by accepting this truth it also helps him gain back some sort of control of his own life.

The video, directed by Alicia J. Rose, and also the first part of a longer story, follows Mould in the close confines of his city apartment. In fact, it follows multiple variations of him and his voices. Each one dressed in identical red flannel shirt and black knit cap, the interaction is fragile and disruptive as each of his voices tries to gain command over the real Bob. At times he fights them back, and other times he can only let the moment pass. His subtle reactions and nuances reflect the inner turmoil of someone struggling to hide it all from the outside world, and by the end he can only simply retreat to the comforts of his own bedroom to try to wait it out. This isn’t the end of the story, and the video ends with a promise of another chapter…

We are all incredibly excited to once again be a part of the Bob Mould and Merge Records team to bring you this incredibly intimate and heavy video from an artist we’ve all loved and respected for decades. We would love to hook you up with a copy of the new album Patch The Sky, or get you out to see him on his spring tour of the US, so please don’t hesitate to get in touch to let us know. You can contact Andy Gesner and the HIP Video Promo team at (732)-613-1779 or email us at info@HIPVideoPromo.com . You can also visit http://www.BobMould.com/ or http://www.MergeRecords.com for more info.