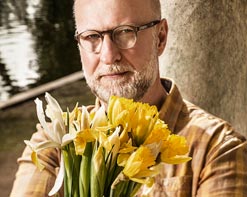 As a founding member of Hüsker Dü, the leader of Sugar, and an accomplished solo artist in his own right, you’d be hard pressed to find anyone with a bigger fingerprint on the sound of alternative rock than Bob Mould. Now, nearly two years since his last release, The Silver Age–which reaffirmed his grip on the punk-infused, pop-smart, guitar-heavy sound he defined–he has returned with his newest solo album, the searing and somber Beauty & Ruin. HIP Video Promo is extremely proud to present the hysterical clip for the album’s lead single, “I Don’t Know You Anymore,” featuring a cameo from The Decemberists’ Colin Meloy.

A perfectly-formed, pop-rock juggernaut, “I Don’t Know You Anymore” hits the sweet spot from the very first beat, uptempo, self-assured, and relentless. Sonically riveting without a second of wasted space, this track is clearly the work of a master at the top of his game. From the verse, to the chorus, to the bridge, the song’s three minutes play like a series of sharp and sticky hooks stacked on top of each other. Brimming with the distinctive sound of Mould’s shimmering, overdriven guitars–powerful, mean, and melodic–this song will remind you how expressive and commanding the instrument can be. Bassist Jason Narducy and drummer Jon Wurster, prove themselves Mould’s strongest backing band to date, elevating the sound with rhythmic depth and density. And at the top of the mix, Mould’s equally distinctive voice sounds as strong as ever, delivering the song’s impassioned, sardonic sneer with unimpeachable authority. A completely exhilarating affair, this song will knock you over and leave you wanting more.

The song’s video–directed by Alicia J. Rose–offers a wickedly funny commentary on the current state of music and consumer culture. It opens with a sketch written by drummer Jon Wurster, featuring Bob Mould as himself, and The Decemberists’ Colin Meloy as a pretentious, condescending, hipster blowhard. When Mould offers Meloy a copy of his new 7″ single, Meloy sours and explains that the old way of bands doing business is dead, and gives him an exhausting speech about the singular importance of social media. Before his exit, Meloy leaves him with one pearl of wisdom: “If you want to sell something, you have to make the people believe it’s going to make their lives better–that they can’t live without it.” This bit of advice prompts Mould to stage a brilliant marketing campaign with his band, as they don matching shirts and lanyards (like Apple geniuses), and hit the local hipster haunts to promote a limited edition, one-day-only, “sunrise sale” of their new single. With a stack of cash, and a few signed Hüsker Dü LPs, Mould brokers a deal to temporarily take over the Music Millennium record store in Portland, Oregon on Record Store Day 2014, and turn it into the “New Millennium.” Word spreads like wildfire, and fans deliriously eager to snatch up the next big thing line up early outside the store the night before. Meanwhile, the band repackages their singles in Apple-esque, shrink-wrapped, white boxes. The plan is a runaway success, and Mould simply watches from across the street, playing Sudoku as the cash comes rolling in. The clip ends appropriately with the hashtag, #IDKYA.

We are very excited to be working with the legendary Bob Mould and Merge Records on the occasion of his fantastic new album, single, and video. For more information on this great new clip or Mr. Mould himself, please contact Andy Gesner and the HIP Video Staff at (732) 613-1779 or e-mail info@HIPVideoPromo.com . You can also visit www.BobMould.com or www.MergeRecords.com for more info.